My journey took me to Pipestone National Monument in Western Minnesota. The park resides on a quarry and is on sacred Indian lands. Many North American Indian tribes, including the Ojibwa, Dakota, Oto, Pawnee, Sac Fox and Lakota came to quarry the redstone known as pipestone or catlinite. Getting to the soft claystone is labor intensive, which is found under layers of hard Sioux quartzite. Only Native Americans with a special permit can quarry the stone and remove it from the lands. Pipestone became a valued trade item and was utilized by American Indians to create ceremonial pipes.

Folklore to Why the Rock is Red? 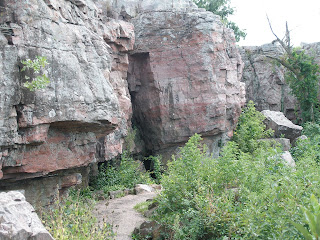 There have been many legends to why the rock is red in color. In 1836, American artist George Catlin- after whom Catlinite is named- recorded the Sioux legend of the origin of pipestone as follows:

"At an ancient time the Great Spirit, in the form of a large bird, stood upon the wall of rock and called all the tribes around him, and breaking out a piece of the red stone formed it into a pipe and smoked it, the smoke rolling over the whole multitude. He then told his red children that this red stone was their flesh, that they were made from it, that they must all smoke to him through it, that they must use it for nothing but pipes: and as it belonged alike to all tribes, the ground was sacred, and no weapons must be used or brought upon it."

The Lakota people have an alternative interpretation:


When the world was freshly made, so the narrative legend goes, Unktehi the water monster fought the people and created a great flood, whose waters engulfed the lands. Perhaps the Great Spirit, Wakan Tanka, was angry with his human children, for he allowed Unktehi to win, and the waters rose in wrath over the new earth. Soon everything was under water except the hill next to the location where the sacred red pipestone quarry is today. The people climbed up to save themselves, but it was no use. The rising waters swept over the hill, and falling rocks smashed down upon the people, killing everyone except one girl who was saved by a big eagle, Wanblee Galeshka, who flew her to the only safe spot, the highest stone pinnacle in the Black Hills. From this union descended the nation of the Lakota Oyate, the eagle nation. As for the other people who died, their red blood turned to pipestone, and created the pipestone quarry, which became sacred, as it was formed from the blood of the ancestors. That is why the pipes made from the red rock are sacred.

I-90 Luverne, MN Exit north on US Highway 75 to Pipestone.

In 1836, Joseph Nicollet led a team on an expedition to map the Upper Mississippi drainage. Nicollet and his entourage arrived at the pipestone quarries on June 29, 1838 and carved their initials on a quartzite rock near Winnewissa Falls on June 30, 1838. 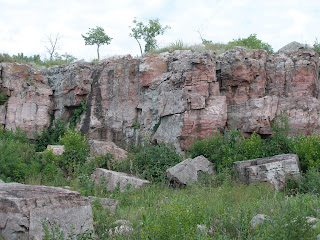