Chester is one of England's beautiful historic cities, located in the North West of England in the county of Cheshire. The city became the largest port in the north west of England in the Medieval period. The History of Chester can be dated back to the Romans who named Chester Deva (pronounced Dewa) after the spirit of the River Dee. Roman Chester was considered as important then as Londinium (London). The Romans didn't just create a small fort here; they meant to stay, building a city for their 20th Legion. The Romans built Chester as a strategic position at the center of Roman Britain, with plans to sail from the River Dee to invade Ireland and North Wales. 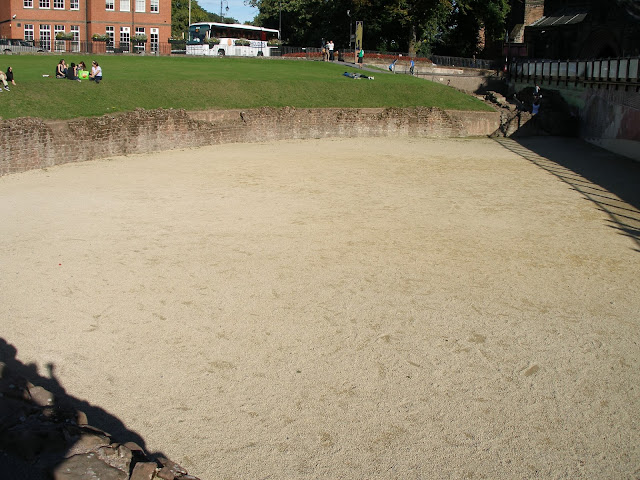 The Roman Amphitheatre ruins ruins in Chester were discovered in 1929 when a boiler room was being built underneath Dee House and a large curved wall appeared. The Amphitheatre was built around 86 AD and could hold an estimated 7,000 spectators. Beside the Amphitheatre stands a shrine to Nemesis, Roman goddess of vengeance. it is the country's largest in Britain (though only half of the structure has been uncovered). It lies beside the Roman fort of Deva, and it served as an entertainment center and training ground for troops stationed at the fort.

Bath is a beautiful city located in the south west of England in Somerset County. The city was first established as a spa town with the Latin name Aquae Sulis by the Romans around AD 60. They built a temple and the famous Roman Baths which have now been restored.

Archeologists suggest the springs in Bath were used for thousands of years prior to the Romans. The springs were popular with the Celtic people who worshiped their Goddess Sulis, and attributed the healing waters to her powers. The Romans adopted these beliefs seeing much in Sulis as in their own Goddess Minerva, and named the town Aquae Sulis, building a shrine to the Goddess Sulis.


The hot mineral waters in Bath are the only springs in England. Rain water from the Mendip Hills filters through an underground layer of limestone in the earth. Down, down it travels to about 14,000 feet, where by geological wonder it is then pushed back up through the earth along fissures and cracks in the limestone rock formations to the surface where it flows out into three springs, at a temperature of about 115 degrees.

The Circus was the masterpiece of John Wood the Elder and is an example of Georgian architecture with fine detailed stone carvings, which begun in 1754 and was completed in 1768. The buildings are constructed from local stone which is a limestone comprising granular fragments of calcium carbonate and its warm, honey coloring gives the Circus and much of Bath its distinctive appearance.

The striking architecture has spawned numerous theories to explain its stark originality. Viewed from the air it forms the shape of a key, perhaps a Masonic symbol? John Wood is also thought to have taken inspiration from the ancient standing stones of nearby Stanton Drew, Solomon's Temple in Jerusalem and the Colosseum in Rome.

The historic town of Stratford-upon-Avon is located in Warwickshire in the South Midlands and adjacent to  the river Avon. The town is best known as the home town of the great English playwright and poet, William Shakespeare. Stratford-upon-Avon has its origins in the Saxon culture of medieval England. For many centuries it was little more than a small market town on the road to London. It is an important gateway to the Cotswolds and was an important place for the wool industry, its close vicinity to the Cotswolds meant that it was an important place for trading of sheep, their slaughter and dealing in fleeces.